The initial scans of both NCI/MDACC-funded "QIBA DCE-MRI Phantoms" were completed on 02/15/2009. Other than assembly differences, there were no significant differences between the phantoms (based on IR T1 measurements of the filling solutions of the 8 spheres).

For the 02/15/2009 scans, some changes to the originally proposed acquisition protocol were made and are shown in red in the PDF file below: File:MDACC QIBA Scans 20090215 Acq Params.pdf.

The changes were made to ensure full coverage of all spheres without aliasing while maintaining the proposed temporal resolution. A full data acquisition run was performed (with the phantom positioned at positions A, B, C, D, and A'). The data were transferred to Ed Ashton at VirtualScopics for analysis. Initial analysis demonstrated unacceptable partial volume artifacts in the coronal plane images due to the plexiglas plates that support the 1-cm spheres. A second study was performed on 03/10/2009 and confirmed the artifacts noted at VirtualScopics were definitely due to partial volume averaging. (Bottom two images of the jpg file attached below.)

Anticipating that the partial volume artifact was responsible for the problems noted by VirtualScopics, a sub-study was undertaken on 03/10/2009 in which the data were acquired in the axial, rather than coronal, plane. Initial review of this data by VirtualScopics indicates this is the preferred acquisition plane if we wish to pursue the ratio correction technique (body coil maps to correct phased array coil image non-uniformity). (Top two images of the jpg file attached below.) However, the axial acquisition will require us to rethink some of the proposed acquisition parameters. This should be discussed at the next tcon. 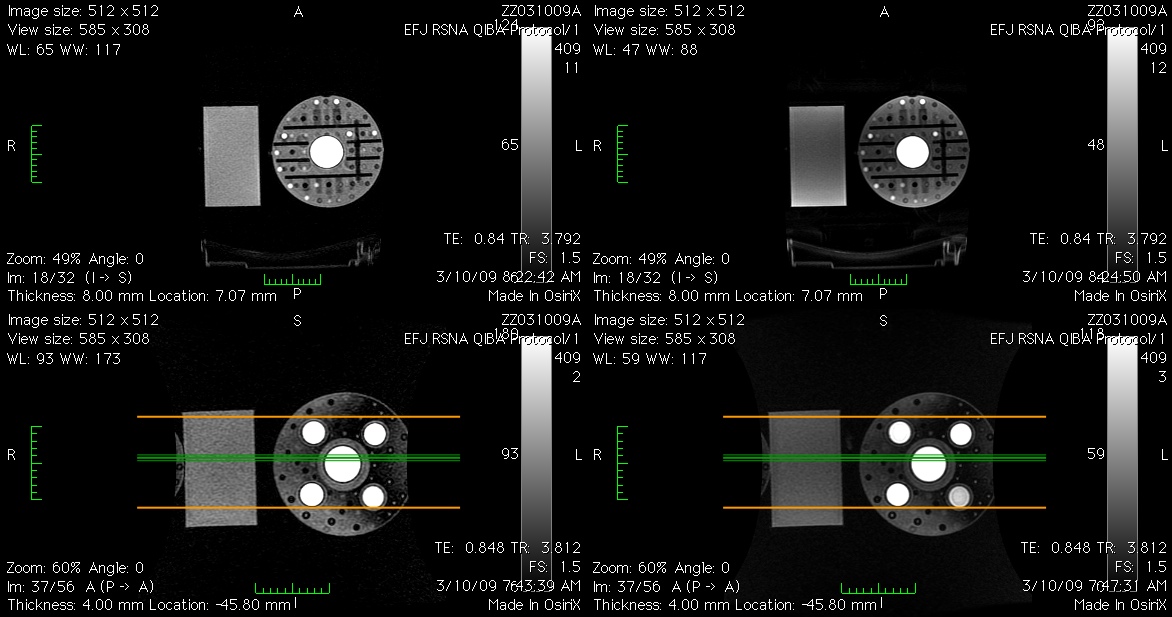